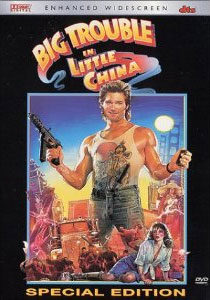 There are actually two versions of the BTLC DVD:The 2-disc DVD “Special Edition” version released in May 2001 contains:

Amazon.com sells the DVD used for around $37

Reviews and Comments about the DVD

“Just checking in with my personal review of the DVD. Picked it up nice and early this morning and popped in the second disc just after I got home to check out all the extras. And boy was I impressed. First off, I found the interactive menus to be very cool. Then I watched the original trailer which was a great experience since I had never seen it before.

The deleted scenes were great. I thought some of them contained great lines from a variety of characters. It was also fun to see “what could have been” in terms of an uncut movie. I was most impressed with the still image gallery and the fact that there were very few regurgitated photos. The shots from production, from publicity stills and from the deleted scenes were all incredible.

There were so many I haven’t gotten through the whole thing yet! As for the music video, it was so 80’s I had to try hard not to laugh. I never finished the rest of the extras, like the Robert Edlund interview, the production notes and the featurette, but I’m looking forward to them. I popped in the first disc just to see the quality of the film and thought It looked great. I’m looking forward to watching it with the Carpenter/Russell commentary.”

“There a two secret things on BTILCs DVD. First, on the second disk if you highlight the Richard Edlund Interview and hit left, a pair of eyes will light up in a cave this will take you to a menu with trailers for the movies the opened in 1986. (Aliens, BTLC, and The Fly)

Second is, if you read the DVD credits, you will be shown pictures from the Commodore 64 video game.

Keep Shaken the Pillars of Heaven!”