Carter Wong played the role of Thunder, one of the best-loved villains in Big Trouble in Little China. Carter took time to answer some questions. What did the ex-Storm have to say?

Thanks to Darlene Takagi for the transcript!

When and where were you born? Married? Any kids?

I was born in Hong Kong. I am not married, but I do have a girlfriend now. I have no children.

What are you doing these days?

These days I am still active in Martial Arts. I am in the process of getting a film put together on martial arts.

How long have you practiced martial arts?

I started as a child and have been doing it ever since.

What have been your best experiences as a martial artist?

Being in martial arts competitions. For me, it wasn’t about winning but getting the chance to see others skills. I met Darlene [Carter’s girlfriend] at a competition and was impressed with her skill. We’ve been friends ever since.

How did you get started in acting?

It was one of those things I just fell into.

About BTLC: How did you first find out about the film?

My agent got a hold of the script for me to look at.

What were your experiences coming into the film?

I never go into a film expecting a lot, just that most things go smoothly, mainly between cast and crew.

How did filming go? Do you have any interesting stories about your work on and off the set?

Filming went well, I was happy with it.

What did you think of the costumes in the movie?

I thought the costumes were great.

What is you opinion of the fight sequences?

Most of the fight sequences were wonderful. I was pleased with the way they turned out.

What is your favorite part of the films?

All of my scenes [laughs] I enjoyed the entire film, through and through.

What do you think of the prospects of a BTLC sequel? Would you be interested in participating?

I’m not sure there will be a sequel. If there was, I’m sure it would have been done by now. With Thunder’s demise in BTLC, I wouldn’t expect to be in the sequel. If I am, it had better be something special.

About People In BTLC: What was it like working on a John Carpenter film? Was JC and easy director to get along with? Difficult?

I enjoyed working with Mr. Carpenter. He was an easy director to get along with, no difficulties. He’s an actor’s director. He was right in there getting his point across yet making you feel comfortable, his appreciation of actors, understanding. He doesn’t make things difficult for you, he did everything to make things easier.

What was it like working with actor James Hong?

Working with Mr. Hong was fantastic. He was so appreciative, very nice. I found him very easy to talk to.

Was there a certain camaraderie between the actors playing the three storms in the film? [the other actors being James Pax and Peter Kwong]

They are both good actors. We got along fine both on and off the set. Both were friendly and funny.

How was it like, working with Kurt Russell? Did you establish a connection with actresses Kim Cattrall [Gracie Law] or Suzee Pai [Miao Yin]?

It was intersting working with Kurt Russell. He was very professional. Suzee Pai was very sweet, shy. I never made much of a connection with Kim Cattrall. I don’t talk down on people so I’ll stop there.

About The Role Of “Thunder”: How would you describe the character “Thunder?”

Someone not to be messed with! [laughs] Thunder is loyal to David Lo Pan and would do what he could for him.

How did they do the “Exploding Thunder Sequence”? What did you think of it afterwards when you saw it on the screen? 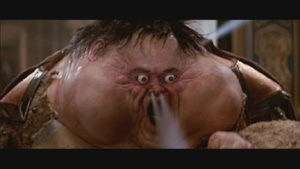 “Exploding Thunder Sequence”? That was all me, years of training until one day on the set I just blew up! [laughs] With the help of an FX crew and something called Movie Magic. I thought it looked wonderful on screen and funny at the same time.

What do you think of the lines you were given? Many fans agree that they’re some of the most popular lines in a film full of great ones.

About Other Roles: You’ve been in quite a few martial arts films in the last 20-30 years. What have been your favorites?

My favorites were BTLC [of course] and Hardcase and Fist. Both were a joy to work on.

About Martial Arts Films Today: What do you think of the martial arts films today?

The ones these days aren’t half as good as some of the ones a decade ago. Some seem a little far fetched. When Bruce Lee did Enter The Dragon, he hired a lot of martial artists instead of actors.

There are several big name martial artists in film today — Jackie Chan, Chow Yun-Fat, Chuck Norris. Do you think that they uphold the tradition of the great martial arts actors of the past?

Jackie Chan is more of a Bruce Lee meets Charlie Chaplin, but is talented in what he does, as many of the others these days.