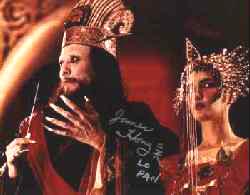 Like Christopher Lee, veteran actor James Hong is one of the few that can embody his villainous roles with sympathy, pity and of course a great deal of power, let’s not forget the intensity both men invoke with their eyes alone-one gaze from either and I can’t take my eyes off them. If you’ve seen John Carpenter’s brilliant precursor to the modern day Hong Kong Fantasies, BIG TROUBLE IN LITTLE CHINA, then you’ve seen Mr. Hong in his most beloved role, that of 2,000+ year old Mandarin demi-ghost Lo Pan. You remember this bad guy as much as the wise-cracking lead, and you are sorry to see the end of this dastardly sorcerer. However much to Jack Burton and Wang Chi’s chagrin Lo Pan is alive and well on the Internet and in Mr. Hong’s heart.

“You are NOT brought upon this world to Get IT!” 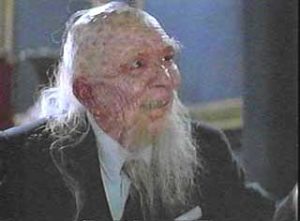 Hong really got a chance to explore his acting prowess with the two main aspects of Lo Pan; the ancient invalid who got some of the best lines and the Grand Mandarin. “There was time for me to do screwy things like wheel my chair towards the the surveillance cameras and all of a sudden I burst out with ‘Now this really pisses me off to no end!’ And when I with Kim Cattrall for the first time, I tried to tickle her and she bit me. What I thought was beautiful was this guy just loved girls, there isn’t anything wrong with that. He’s very lovable in that sense. Very cute, but he’s deadly. The only thing I had wished was that Kurt’s character be a little more threatened instead instead of being quite so cool around Lo Pan. Because in way, it makes Lo Pan not so deadly. Only Dennis was afraid of me… it worked though. Because of the wizardry of Carpenter and the people that worked on it.”

Well BTILC is one of my all time favorite movies, James not surprisingly knows a main reason why. “As you can see, every time you see it there is something else that we did, that you didn’t see before. On a feature where you put everything into it there will be a prop, a little sentence or some background piece, something funny that Kurt or Kim Cattrall said, or did that she thought was funny. Everyone put their hearts into it.”

Hong is understandably unhappy over the treatment of the film and defends Kurt Russells performance. “The critics tore him to bits, which hurt him a lot because he gave it his all. Only the fans loved it. The critics were too high-brow, they just didn’t get it.Fox did not push that film enough. People just had to discover that movie as time went on. ”

The Mandarin was my favorite version of the character, so I asked James what he did to help create this enigmatic being. “As far as the costume they asked me for some of the Chinese words, but other than that it was all the work of the costume designer. I thought for sure they would win for costumes and set design. All of the sets were built, because as you know, computer graphics weren’t really in use at that point in time. The tunnel where you saw the people waiting in sewer, each tunnel bracket was a little bit smaller than the last so it gave the illusion that it went on forever. And that hall where we had the final battle, was great. I said to Carpenter “Boy this Hall, these sets these should win an Academy Award.” And he said to me: ‘Well what about your performance?’ It never came to be because usually villains don’t win awards. The faithful fans and the following is my reward, because that proves to me that you’ve given enjoyment to others. It’s a bigger award than having something on your mantel.”

Hong ad-libbed too.”Good Knife, goodbye Mr. Burton!” “This really pisses me off to no end”. And that little thing that I did with my pinkies when I battled Egg Shen in the hall. A lot of fans remember that. All of that came out of fun, and also they use that kind of battle in the Chinese comic books. The rays coming out of the wizards hands and they meet in the center and there’s the battle. So Carpenter used that technique from the Chinese comic books and films. That little hand movement-I wanted to do something different other than the usual wizard stance, we’ll just leave that to Egg Shen, let him do the standard one-I wanted to be different.

It wasn’t that easy because of that costume, I wore 1 ft lifts. It was very hard to move around,”Hong says as he remembers it wasn’t easy being the towering entity. “As I went down that little escalator, I thanked god I didn’t trip. It was very dangerous, stepping onto the first step with those lifts you just start to rock back and forth, and still you had to look menacing. There was none of this ‘Whoooaaa!’ type of thing allowed. We had fun. Kurt was a big star, but not as big as he is now. He was really a regular guy. There was no big star attitude on that set as far as I’m concerned. Everybody was contributing. And this included, obviously the stunt and fighting choreographers, they all had high hopes for that. It was first time that the Chinese had a chance to do almost an entire film of their own kind, their own comic books and that. Everybody was trying their best in their own special way, even the people who were fighting in the background. There is something special about it. To this day I still love what Kim Cattrall did, I thought it was so femine, so lovable. And yet the critics again tore into her. But I thought it was a very good job. Suzee Pai was wonderful too.”

Neither of them had green eyes but that isn’t stopping Hong. “They had put lenses on every day. I am still looking for the real thing!” Which brings James back to the charisma and charm of Lo Pan. “He’s a very sympathetic character, he’s been wandering the world looking for the girl he loves. We need more of the good guys doing that. Now its the girls that are roaming around. (Laughs)”

Working with Carpenter was special too. “I think he was possessed with doing a great job, a fun job. The rest of us caught onto that, he did the music for the film. He put his heart into everything, he followed BIG TROUBLE through and had the greatest hopes. Something went wrong with the studio’s promotion, people had to discover the film.”

Webweavers are urged to check out the following sites for more on James Hong.

and don’t forget to look for Hong in Westwood interactive’s Blade Runner game reprising his role as Chew.